Mary Lambert is SO excited to begin performing live again after a forced two year pause from COVID restrictions.  She feels privileged to be able to share her love of performing for children again with communities across Canada.  Please consider having Mary come to your area and perform at your festival, fair, library, elementary school, or daycare event.  Thank you!  She hopes to see you soon!

Canadian, two-time Juno Award Nominee, Mary Lambert, has worked with children in the entertainment industry and performed over 3,500 shows throughout Canada since 1998. During this time, she has released 11 children’s CDs, two children’s books, and two live concert DVDs.

Mary is thrilled to be branching out with a new project filled with faith-based songs for adults.  This new CD entitled “i am HIS” is a deeply personal project woven from Mary’s pain, joy, trials, faith, hope, and most of all, love for family and for God.

Mary Lambert is a Christian who loves, believes, and relies on her Saviour and Father in Heaven.  She is married to her childhood crush, and together they have four children and ten grandchildren. Mary loves and respects members and friends from all faiths, and is, herself, a member of the Church of Jesus Christ of Latter-day Saints.

“i am HIS” was released on October 11, 2021 - Please  go to my HOME page and check out Mary Lambert Faith Music Site for further information.

TABBY TOODLES' PIRATE ADVENTURE is a wonderful adventure that takes readers from the high seas on a pirate ship to a tropical island, where a "golden treasure" is finally discovered.  On the back cover, readers are invited to look for and find several items thoughout the pages of the story.  Beautiful watercolor illustrations are presented with this wonderful rhyming pirate adventure, which will have children and families reading and rereading again and again.

TABBY TOODLE'S PIRATE ADVENTURE has received a "Tillywig 2019 Top Fun Award"!  Review is posted below - to purchase, simply go to my on-line STORE, and an autographed copy can be mailed directly to you. 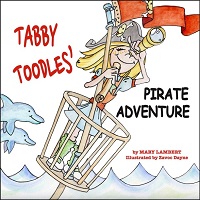 It's rare for a children's book to prove itself a gem before the story even begins, but Tabby Toodles' Pirate Adventure does just that. The rousing tale is preceded by a highly amusing glossary of Pirate Lingo and an illustrated cast of characters that captivate readers and leave them hungry for more. That anticipatory excitement proves to be more than justified as this joyful adventure unfolds in playful pirate vernacular youngsters find irresistible. There is merriment on every page as readers follow a happy (mostly female) pirate crew in search of treasure. Zavoc Dayne's gorgeous water color illustrations mesh perfectly with Mary Lambert's delightfully inventive rhymes in portraying an unforgettable group of seafarers as they sing, set sail and maintain a festive mood even in the face of rough weather and a surprise treasure! As Katy, Tabby Toodles and crew so eloquently put it: YO HO HO... a pirate's life for me! YO HO HO... adventures on the sea! YO HO HO... we're searchin' happily!

This charming book delights readers with its exuberant illustrations, engagingly playful storyline and, most of all, with its loving depiction of the title character, a sweet, headstrong child named Tabitha Marion Evelyn. The writing is top-notch, with deeply satisfying rhymes and a natural-feeling rhythmic flow that effortlessly carries readers forward and keeps them wanting more. The exceptionally playful language follows a songlike ABABA form in which the A sections describe various aspects of Tabitha Marion Evelyn's personality and physical traits, while the B sections get maximum mileage (smileage, really) out of the interplay between opposites: black/white, day/night, yes/no, stop/go, and so on. As playful and humorous as these visual and verbal elements are, they also movingly express a mother's love and appreciation for her daughter and the mutually adoring bond they share, making this a joyful read for parents and children alike.

www.tillywig.com
There is a whole lot of fun to be had listening to this captivating collection of music for the entire family. Liveliness and humor are chief among the array of winning ingredients that get kids and parents up on their feet, dancing and singing. Familiar favorites and equally engaging original material (written by Mary Lambert) reveal an unusually high level of musicianship as the band moves fluidly through genres that include blues, rock & roll, swing, and some absolutely electrifying bluegrass. There is a freshness to the arrangements and performances that makes even classic family songs sound new. 'I've Been Working on the Railroad,' with its dramatic train-chug opening, gorgeous vocal harmonies and alternating tempos is a particularly standout arrangement. There is over 50 minutes of music in all, 16 adventure-filled songs that amply demonstrate Mary and the band's ability to put ear-to-ear grins on listener's faces.

"Canadian singer/songwriter/entertainer Mary Lambert serves up 16 songs to get kids dancing, moving and wiggling.  Employing a plethora of musical styles, Lambert begins with the mid-tempo jazzy jive of "Singin' Along", followed by the horn-laden 50's style rock of "Just Dance", and country hoedown in the silly "Grandpa's Whiskers".  Sheb Wooley's classic 1958 novelty song "The Purple People Eater", a funky rendition of "I Know an Old Lady Who Swallowed a Fly", and a bluegrass take on "She'll Be Comin' 'Round the Mountain" add to the mix.  Lambert's many original songs her lightly rocking ode to haberdashery "Wearing a Hat is Where it's At", the mock monster movie anti-mosquito music of "Mozzie Mash", and the encouraging "This is Really Hard to Do".  She is aided by some excellent musicians throughout, including notably Dave Barton's expressive guitars, mandolin and horn arrangements.  This is a light and fun album for younger children and their parents to listen to while they boogie around the house."

We are pleased to announce the release of TABITHA MARION EVELYN (TABBY TOODLES - A Book of Opposites. This new book is Mary Lambert’s first in a series, which will feature Tabby Toodles. Four other lovable characters, will be introduced in her second book, which is currently in the works.

TABITHA MARION EVELYN (TABBY TOODLES) - A Book of Opposites, stars Tabitha Marion Evelyn, who is a sweet, funny, contrary, strong-willed child.  She loves to do the opposite of everything she is asked. She is loved!  This book is suitable for all children, but targets ages 4-6 for learning about opposites. Perfect for preschools, elementary schools, libraries and families with young children.

Juno Award Nominee, Mary Lambert, is a family singer/songwriter/performer/author, and outstanding Canadian artist in the children's entertainment field. Her two Juno nominations and thirteen awards from the United States are a remarkable testimony to her talent and artistry. Since 1993, Mary has toured and performed well over 3,000 shows at elementary schools, libraries, daycares, music festivals and family focused events throughout Canada. Mary Lambert Productions has released 11 solo CDs, and two live concert DVDs and one children's book. The book, Tabitha Marion Evelyn, is based on an original song, created by Mary Lambert, found on her Monkey Sing, Monkey Do CD.

Illustrator, Zavoc Dayne (pseudonym), lends his talent to this book, as the character of Tabby Toodles comes alive with her knobby knees, freckles, hazel-green eyes, and cute, up-turned nose. Zavoc was trained in the house of a classical artist and is a traditionalist. He attended The Alberta College of Art and design and received a diploma in Drawing; he then trundled off to The University of Calgary for another few years where he received a Bachelor of Fine Arts degree. In the years since, he has plied his trade as an illustrator and designer in all sorts of places, both public and private. From large scale etched glass mural designs in some of Calgary’s most prestigious office spaces to music CD’s and cover designs, his work has cropped up in all sorts of places.

TABITHA MARION EVELYN can be purchased by going to Mary’s online store on her website at www.marylambertmusic.com, or after any live Mary Lambert presentations in your community.

Juno Award Nominee, Mary Lambert, has released her 11th solo CD, after a five year recording hiatus. During these past five years, Mary moved across the country, from Ontario to Alberta, and then took a two year break due to a close family member's struggle with cancer. Mary has been working on this project for the past two years, and it has been wonderful to be involved in the creative process again.

We are pleased to announce the release of SINGIN' ALONG AND ADVENTURE SONGS. This new CD is Mary Lambert's best yet, featuring original, traditional and popular songs from years gone by. Mary is accompanied by fantastic musicians, and amazing children who come from all over Alberta and Ontario to lend their singing, laughing, and pirate sounds. The project was recorded at Summit Sound Recording Studio, in Westport, Ontario. (see complete list of musicians and children who participated below)

SINGIN' ALONG AND ADVENTURE SONGS features over 50 minutes of sing-along, dance-along and adventure songs with amazing musicianship. Parents will love to listen as much as their kids! This CD will take listeners on a pirate adventure, a wagon ride through Mary's new home town of Calmar, Alberta, and much, much more. Dance the twist, dance to keep mosquitos (mozzies) away, move robot style, play the air guitar, get your spooky on, learn the arm swing, visit Grammy's House, have an encounter with a Purple People Eater, take a trip on the railroad, and see if you can discover what "The Thing" is..

Of the 16 songs found on this CD, seven are original, never before released. Songs include: Singin' Along; Just Dance; Grandpa's Whiskers; Grammy's House; Horsey Horsey; The Purple People Eater; A Pirate's Life Fer Me; I Know an Old Lady Who Swallowed a Fly; My Little Red Wagon; She'll Be Comin' 'Round the Mountain; Wearing a Hat is "Wear" it's At; I've Been Working on the Railroad; The Mozzie Mash; This is Really Hard To Do; The Thing and The Quartermaster Store.

SINGIN' ALONG AND ADVENTURE SONGS was released on April 1st, 2017, and you can purchase the CD by going to Mary's website at www.marylambertmusic.com, download at iTunes, or purchase after any live Mary Lambert concerts in your area. This CD is perfect for long road trips, or home/day care/school sing-along/dance-along time. We hope you will enjoy listening, singing and dancing along to this new CD!