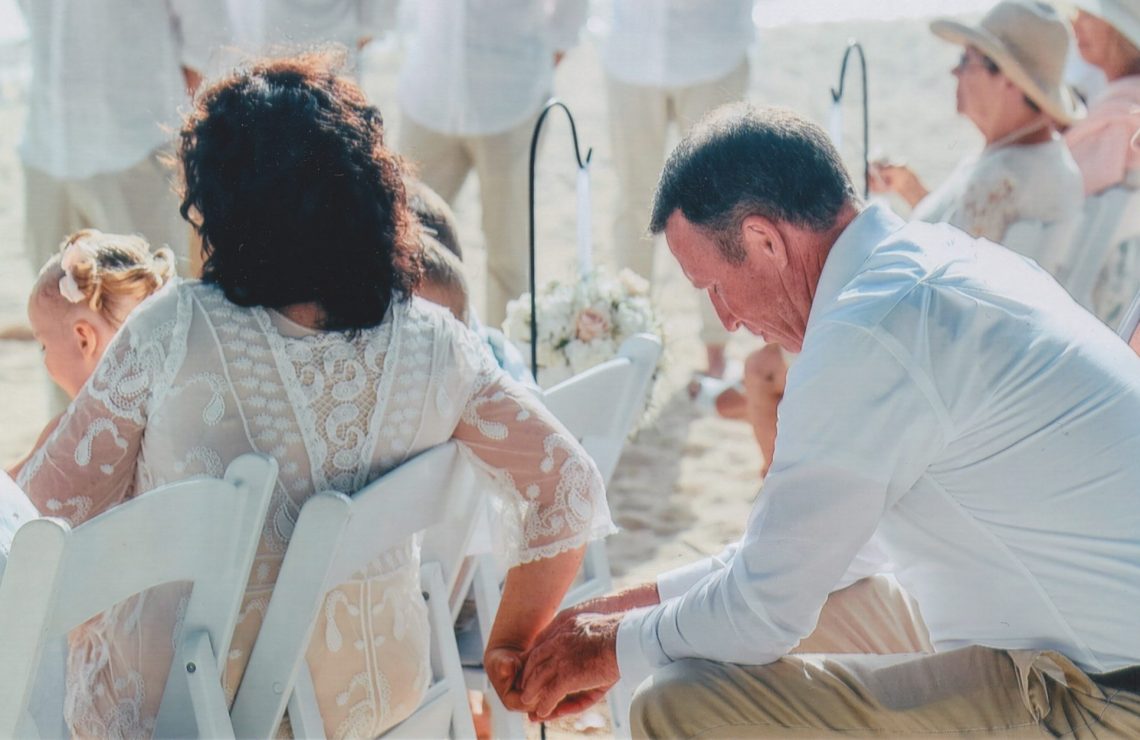 I have been married to the same man for 37 years. Don’t get me wrong, married life isn’t always roses and sunshine, but we made it through the tough times and have created a beautiful life together. Four children. Eleven grandchildren. Family is everything to us, but when the kids are grown and gone, what’s left, is just the two of us.

As much as we love our children, our union is the one that will carry on without them as they begin to create their own families. At a very early stage in our marriage I recognized this and decided that if I wanted a happy marriage, we had to create it, and work hard at keeping it. Doing things together, and taking time for each other were important. There is no perfect marriage, but it’s been pretty darned good! I can honestly say that he makes me smile – thus the name for this song I created for my husband – “You Make My Heart Smile”.

Here is our story…

MEETING EACH OTHER – I don’t even remember meeting my husband because we were so young when I saw him the first time. As a child, his family would travel from Montreal to Muskoka in the summers. We met at church when his family would attend each Sunday. When his family moved to Muskoka at the age of 15, I had a BIG crush on him. Things fizzled, but the feelings came back later when he returned home from College one spring. I was in grade 12 and I invited him to attend my high school grad dance with me. It was a magical time as we began to date steadily and realized we both had feelings for each other again. We were able to date for five months before I left home in Bracebridge to attend college in London, Ontario. Two months after that we would be separated for 18 months, when he left for Sydney Australia to serve a mission for our church.

BEING SEPARATED – Back in that day (1982), we had no email or social media to connect us quickly and easily, so we would write physical letters and wait weeks until they arrived. We tried to write each other every week. On the back of the envelope of every letter from him, he wrote the initials M.T.Y.L.T.T. He kept writing and asking me if I could guess what it meant. I had no idea. It wasn’t until he returned home that he finally told me it meant “More Than Yesterday Less Than Tomorrow”. Meaning, I love you more today than yesterday, but less than I will tomorrow. My future husband and I kept every letter we wrote to each other during that time, and it was wonderful to find them this year as I was creating the music video for “You Make My Heart Smile” (letters and cards included in music video). As I was going through all of these letters and cards, memories flooded through me and those exciting-falling-in-love feelings came back. It was like I was experiencing this time all over again. It was wonderful.

REUNITED AND IT FEELS SO GOOD – I’m not going to lie. I dated a lot of other boys while he was away, but no one too seriously. I wasn’t sure how we would feel when we saw each other again after being apart for so long. I was pretty nervous when I went with his parents to meet him at the airport for his return home. For a year and a half I kept imagining how it would feel to see him again. Wondering if I would still feel the same. I was sweating buckets waiting for him to come through those doors. He looked cool as a cucumber, and that drove me crazy, since I was so nervous. As he walked through the doors at the airport, he smiled and winked at me. Right from that first moment, I knew it felt the same. Four days later…he asked me to marry him.

THE PROPOSAL – In the music video (You Make My Heart Smile) you will see some initials etched into wood – M. T + G. L. Four days after he returned home from Australia, I planned a surprise dinner for him in a LITTLE cabin on his little island on Oxtongue Lake (I’m talking tiny – one room, nothing but walls and a floor – no toilet or running water). This is where his family lived and where he grew up as a teenager. I made a nice dinner and a home-made strawberry rhubarb pie. I planned everything perfectly for the surprise. While we were out for a canoe ride on the lake, I had his sister set up a candle-light dinner for us in the tiny cabin. As we canoed past the island, he noticed a light, and he set out to find out who was in his cabin. It was a fun surprise – a nice romantic dinner, and we carved our initials into the wall of the cabin as a memento of our evening together. That same night afterwards, he drove me to a little place called Hunter’s Bridge on the Oxtongue River (also shown in the video). This is where he proposed to me after A LOT of nervous hemming and hawing. We were married that same fall, on October 30th in 1984. When my husband and I traveled back to Ontario this summer (2021), we canoed on Oxtongue Lake and found our initials still carved into the wall. That cabin is barely standing, but those initials are still there!

YOUNG MARRIED LIFE – We were married for two and a half years before we started having children. Life was a blur for me after the children came. Three C-Sections in a row and recovering was difficult. I felt like I survived each day during that time due to lack of sleep. I was a stay-at-home mom and my young husband worked away from home a lot on constructions sites – quite often away for five or six days each week. This meant I relied on my parents for support, a lot, as we lived right next door to them (thank you mom and dad). There were some really, really difficult times. I’m so grateful we made it through this time together – but I probably wouldn’t have had it not been for the ability to pray and receive answers. One of the most pivotal moments of my life came just before our little family moved from Muskoka to Kingston. I remember walking deep into the woods on my own and offering a heart-felt prayer. This is one of those sacred times that are too personal to share, but I came away knowing that I would be happy in my marriage and knowing that the road forward would be better. Almost immediately after that, things fell into place for a job change and a move from Muskoka to Kingston. That move was the best thing for our little family. My husband’s change in employment allowed him to be home each night and we had to rely on each other, as we were no longer close to extended family.

RAISING OUR CHILDREN – Our move to Kingston brought a new child into our family – An adopted child (this miraculous story will be shared in the blog for ADOPTION MEANS). We were now a little family of six and Kingston was a wonderful place to raise our children. We met many amazingly good people there. Friends we will have and cherish forever. In this place I had many meaningful experiences that fundamentally changed who I was with regards to my relationship with God. My husband and I worked well together as parents and learned to be a team.

THE EMPTY NEST – Immediately after our last child left home and we became empty nesters, an opportunity was presented to my husband for us to transfer to Edmonton, AB for his work. I said “NO” because there was no way I wanted to leave Ontario and our friends and family there. Next morning I woke up and had the thought that we should at least pray about moving, since we didn’t go looking for this employment transfer. We spoke about this and knelt down together and prayed, trying to be totally open-minded. Holy cow! Within one week of offering that prayer we sold our home, which wasn’t even listed on the market. Within two days of offering that first prayer we BOTH began experiencing excited feelings in our heart (even though WE DIDN’T WANT TO MOVE). That whole process was incredible as we moved forward with faith. We decided that it would be an adventure and that if we didn’t like it, we could always move back. We were kind of excited knowing that we could make the decision to stay, but realizing that there was some reason God wanted us to move. Within a few years of our move, we found out that our son-in-law had stage 3 Colon Cancer, and they lived out in Alberta (you will learn more about this in the music video and blog for I KEEP MY FAITH). We knew then why God gave us the opportunity to move out to Alberta. What a tender mercy for them and us. We were SO glad that we listened to the promptings of the Spirit and took the leap of faith to move. It would have been horrible not to be able to be close to them during that time to help with our two tiny grandchildren, our daughter (who was pregnant with her third child), and son-in-law, who was just finishing up his teaching degree.

PRESENT – My husband and I have settled into life out west together. We love to play pickle ball and go hiking in nature out here. I’m grateful that we have interests that we enjoy together. I’m hoping for many years to do these things, as we enter into our retirement about five years from now.

YOU MAKE MY HEART SMILE – My husband has always had a wonderful sense of humour and I can’t imagine a better partner to share my life on earth and eternity with. He is, and has always been, easy-going, supportive, loyal and fun. I know I am a lucky girl. Marrying him was the best decision I’ve made in this life. I feel like the later years of our life might be just like that little cabin – the condition we found it in this summer. “That cabin is barely standing, but those initials are still there!” As the two of us age together, in later years, perhaps we will be barely standing, but our love will still be etched into our hearts. I LOVED going back to that dilapidated cabin and finding our initials 37 years later. 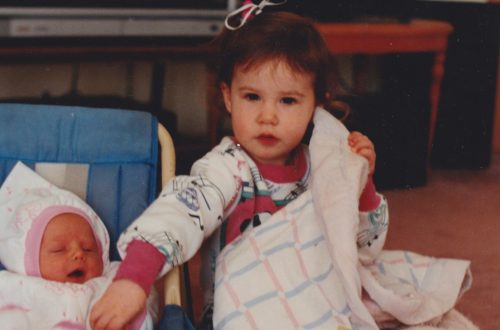 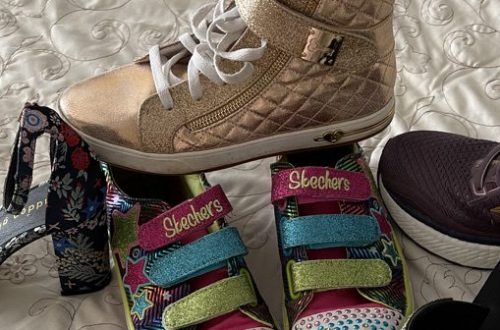 IN HER SHOES by Mary Lambert 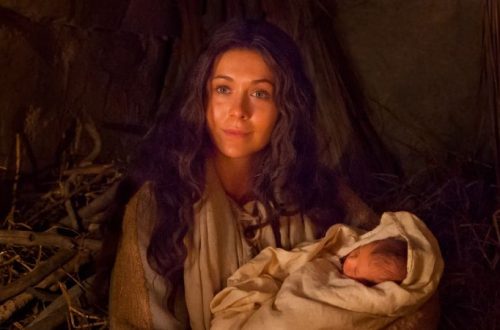